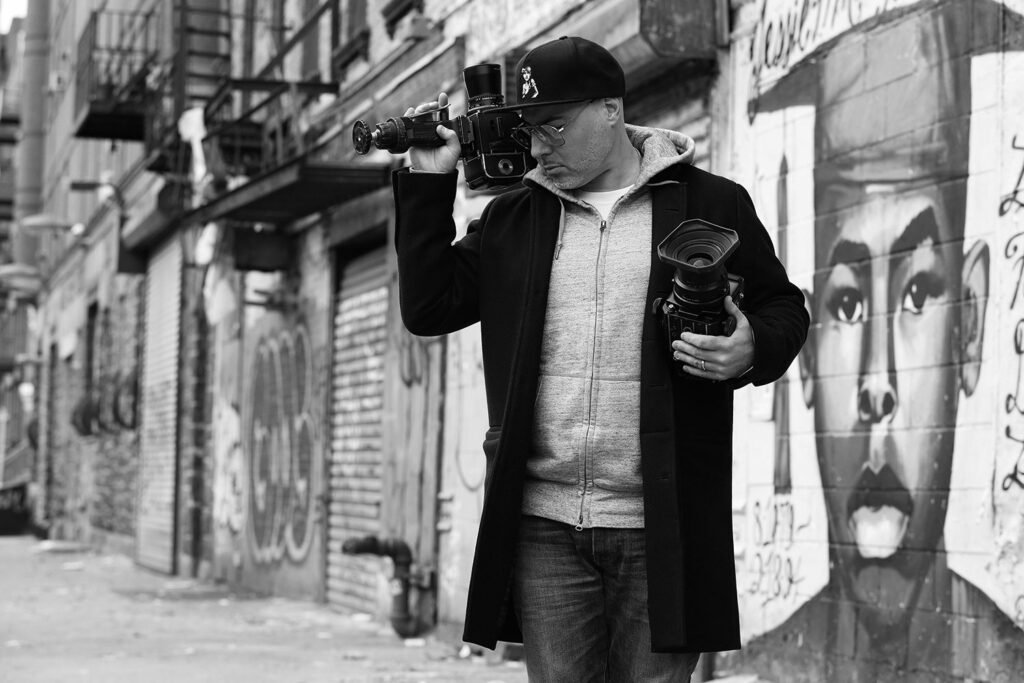 [vc_row][vc_column][vc_custom_heading text=”IS DOING THE CAZAL JOB” font_container=”tag:h2|text_align:center” google_fonts=”font_family:Libre%20Baskerville%3Aregular%2Citalic%2C700|font_style:400%20regular%3A400%3Anormal”][vc_column_text]Armen Djerrahian is no stranger to legendary eyewear: “THE CAZAL JOB” marks the photographer’s fifth shoot for the iconic label from Passau, Germany. What’s more, the Brooklyn-based photographer has been a passionate CAZAL fan and collector for several decades at this point – and it shows in his work. Thanks to the personal connection to the brand – and his background in hip-hop and street culture – Armen Djerrahian’s images capture the CAZAL vibe like no other. SPECTR sat down with the well-traveled pro to learn about his creative process.

I consider myself as a product of the ‘80s. I embraced hip-hop culture around 1982-83. I was a B-boy and graffiti writer and also rode freestyle BMX.

Hi Armen, please give us a short introduction of who you are and where you’re from.

I grew up and spent most of my life in Paris and I consider myself as a product of the ‘80s. Meaning that we had the best influential movements ever, from music to culture. The early ‘80s brought so much into my life, as I embraced hip-hop culture around 1982-83. I was a b-boy and graffiti writer and also rode freestyle BMX. These two movements really made me who I am today. After school, I used to either go and ride or join my friends and dance until my body would ask me to stop. Sometimes on the weekends I did both, riding in the afternoon and dancing at night. Hip-hop was predominant in my teenage years and I was fortunate to live next to the 19th district of Paris where everything happened. 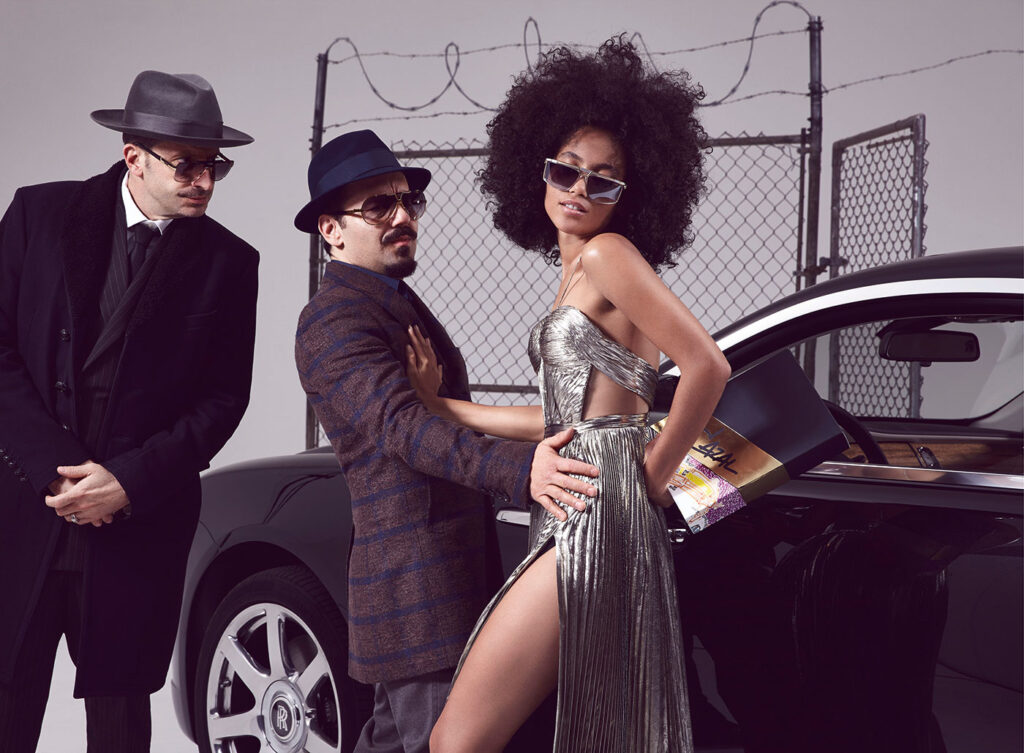 Later on you moved to Brooklyn, another hip-hop hotbed. How did that happen?

Yes, I moved in 2006. I needed a change in my life and NYC always had that special place in my heart where I felt I would move one day. My career in France reached a point where I couldn’t see any evolution and I needed to reposition myself. Working mostly in the urban music industry had closed many doors to my career as a photographer and director.

What attracted you to photography and how did you get started?

Well, I started photography as a total autodidact. Never took any class, never been an assistant, which had me starting my career with a lot of shortcomings. I was lucky enough since at the time, I was writing articles for a French BMX magazine called Bicross Magazine. The publishing company gave me all the rolls of film that I needed and I did not have to pay for anything in terms of film development and prints. I started photography in 1991 and a few months after that already had my first photos published in international BMX magazines. Around 1994, music became predominant in my professional career and I started concentrating my work on shooting artists for the press and album covers.

Your eye is what makes your image different. You can have all the best cameras on the planet, but that won’t make you a good photographer.

What characterizes your specific approach as a photographer?

It’s hard to define my approach, but I often say that your eye is what makes your image different. You can have all the best cameras on the planet, but that won’t make you a good photographer. It is your interpretation of the subject that makes you different. It’s about focusing on creating your own style and your trademark through your work. But that takes time. 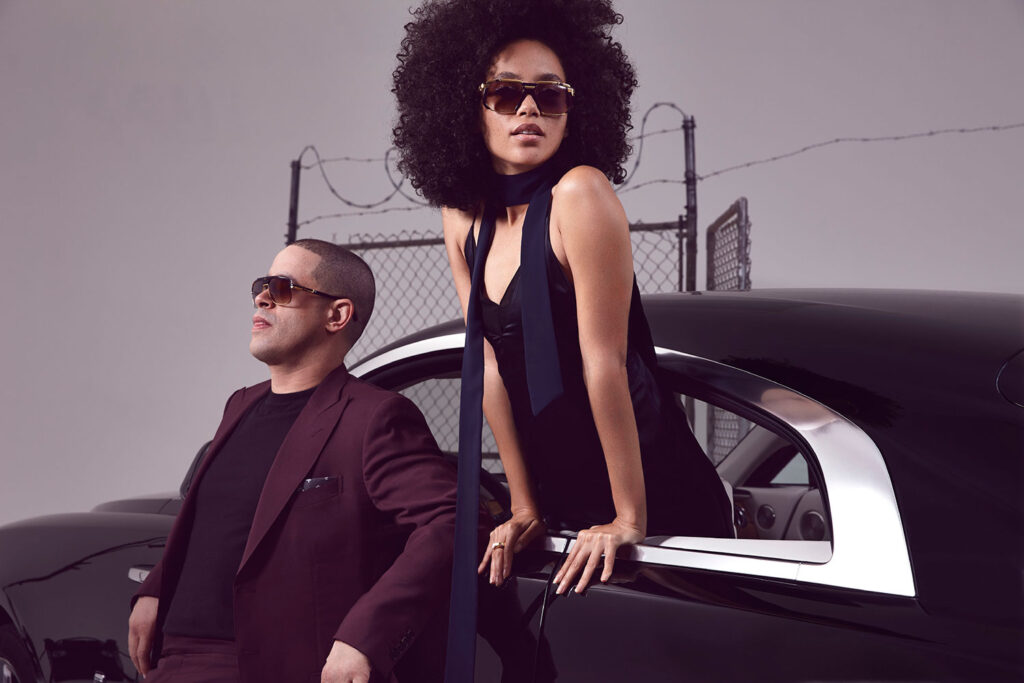 What is photography to you – art or craft?

Passion! I am totally grateful for having the luxury of doing a job that I’m passionate about. Of course it is a form of art, but that kind of consideration comes with time, when your images are considered as “iconic”.

I love to consider myself as a witness, a sort of “voyeur”

What’s the most inspiring thing for you in terms of photography?

Life, people, and aesthetics. I love to consider myself as a witness, a sort of “voyeur.” Behind each human being there is a story to tell which is why I love portraits. But also behind each human there is an environment which why I also gravitate towards “lifestyle” photography. You can tell so many things in one image. 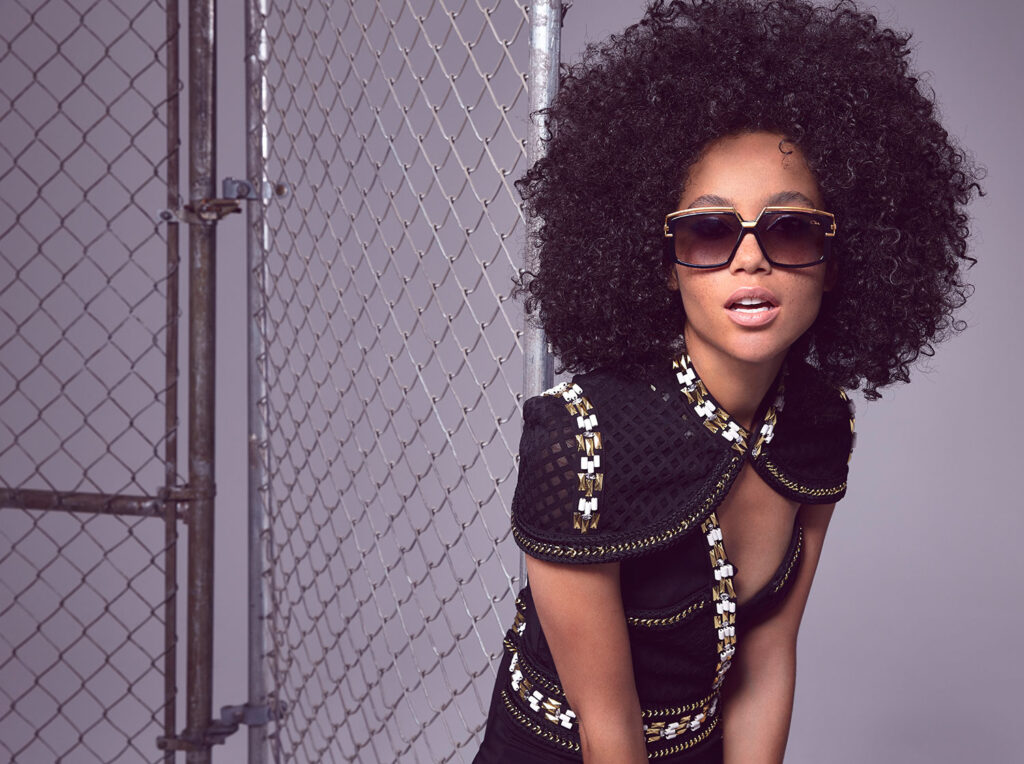 And what’s the worst thing about this profession?

I would say being a freelance photographer and not knowing if you’ll have a job tomorrow. But that’s also an amazing challenge.

The current campaign “The CAZAL Job” marks your fifth shoot for CAZAL. What is the special thing about taking images of glasses and sunglasses?

I’ve actually shot more than that because I’ve shot their “optical/prescription” lookbooks as well. Our collaboration started in 2013 when I was asked to shoot the entire Legends collection. I then did the shoot with Spike Lee, the one in Miami, Paris and this one.

Most of my CAZAL frames are made in West Germany. To me personally, CAZAL has always been part of the hip-hop culture.

In which way are you personally connected to CAZAL?

I’ve been collecting CAZAL since the late 1980s when I picked up my first pair: a brown »607« that a friend brought me back from New York. To make a long story short, I ended up losing them during a dance battle. I was so pissed off. Then one day, I earned enough money to start collecting them and own that brown pair again. Most of my CAZAL frames are made in West Germany, which tells you more about what I own. To me personally, CAZAL was part of the hip-hop culture. I grew up watching artists wearing them. So it has always been associated with the culture until I learned more about the brand and Cari [Zalloni]’s work. 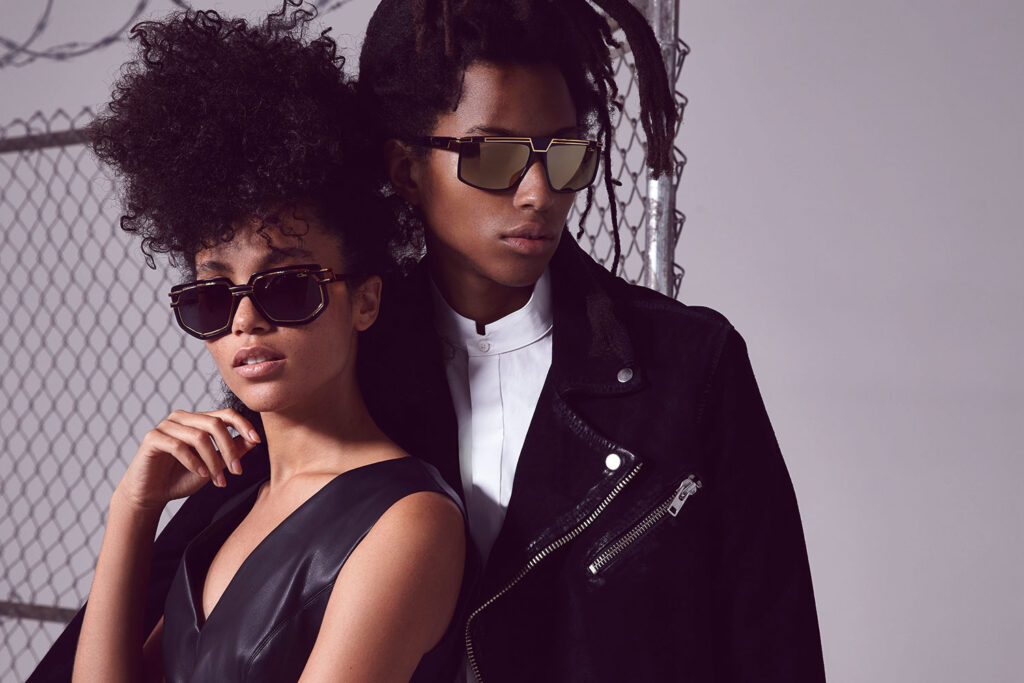 And how did you end up being their “campaign photographer”?

I don’t know! I believe we have a great relationship. It’s really hard to earn their trust, but I guess, they all know how much I love the brand and have trust in my vision. It is a humbling experience to me.

Do you think it’s important that a photographer has a personal connection to the products he shoots?

Not really, but it is definitely a plus. I’m shooting photos and campaigns for other brands, but I’ll always have something special for CAZAL. Once I had the chance to visit the headquarters in Passau and that’s when they realized how much I knew about the brand. 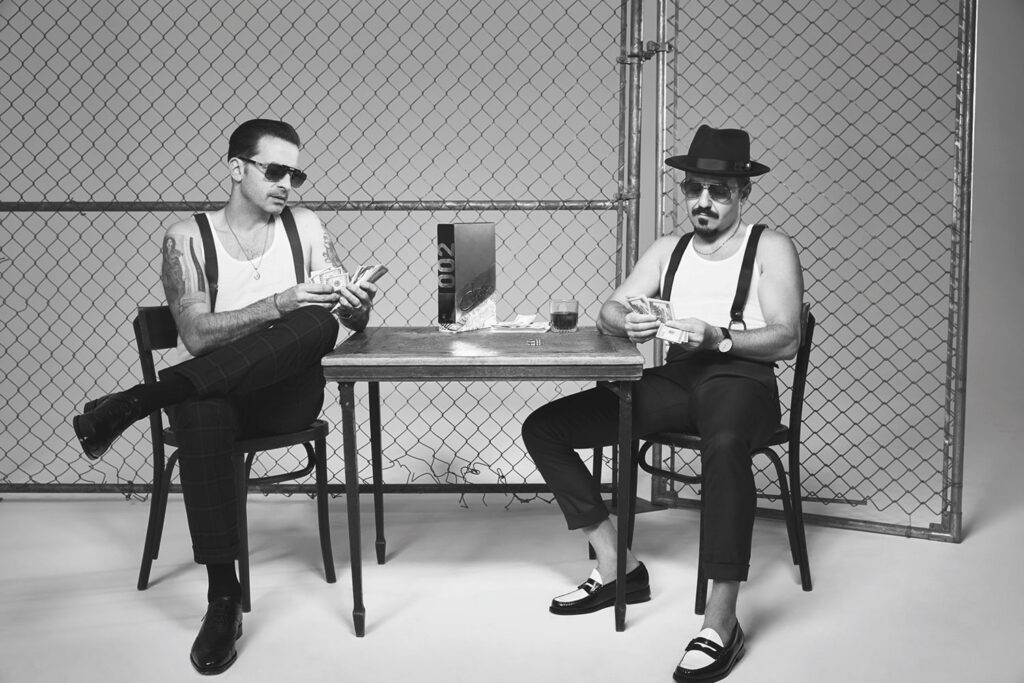 How did the idea behind the “The CAZAL Job” come about?

The way we work with CAZAL is mainly based on communication, which isn’t simple since everyone is based in Germany and I am in NYC. We brainstorm a lot with the staff, most specifically Beate Obersteiner and Sven Christ. They’re coming up with hundreds of ideas and directions and I’m the one who shakes everything up until we find the one strong concept. Sven brings in creative and I come up with the vision and details.

But what remains the most important is how to respect and continue to build what Cari Zalloni would have eventually envisioned. That’s the main challenge. So whenever possible, we subtly pay homage to some of the old campaigns. The concept of the “CAZAL Job” came from a meeting with legendary b-boy Crazy Legs from the Rock Steady Crew. I believe he had a meeting with one of CAZAL’s US reps who ended up posting a photo on his Instagram. Sven and I immediately responded to it. The challenge was to create a story without falling into a sort of cliché that would bring back that “Old School” imagery that often sticks the brand. CAZAL is still a current eyewear company that has grown with times. 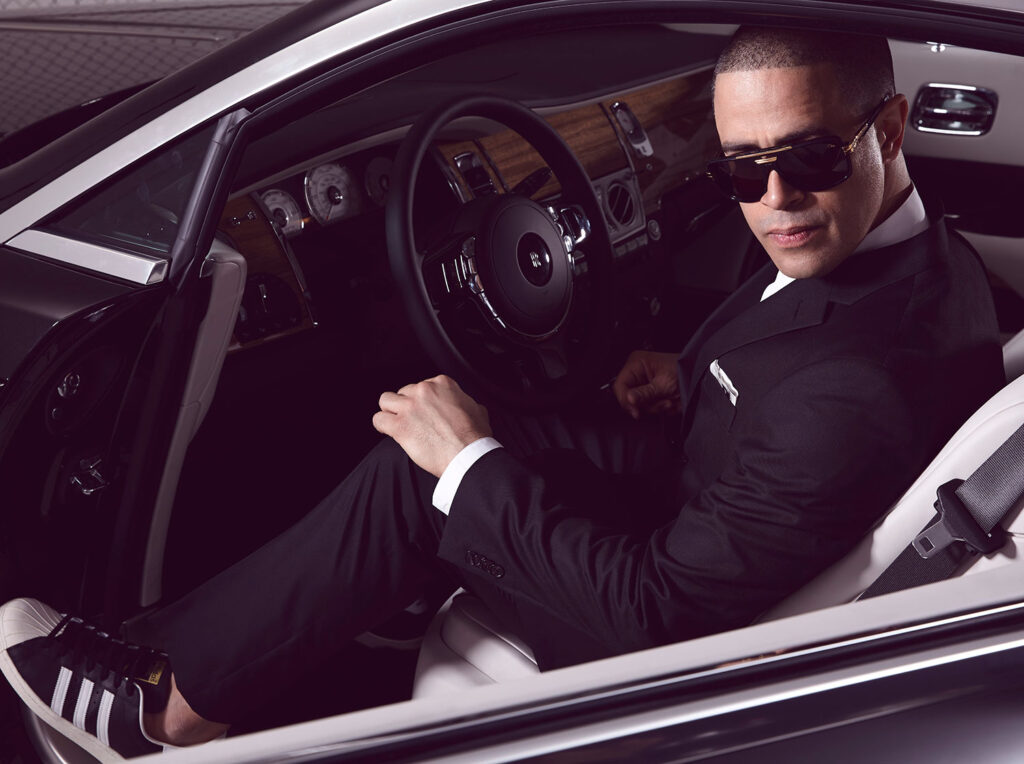 The title sounds a bit like “The Italian Job.” What’s the story behind the campaign photo shoot?

The pitch was to play around the »002«. The staff has found a certain number of unseen sketches drawn by Cari. Unreleased and never seen before models that the actual staff decided to put into production in limited quantities. The »001« came out last year and »002« should come out in 2017. Since we already had Crazy Legs as part of the cast, Sven brought the idea of asking my friend Michael “Kaves” McLeer to be part of the shoot. Kaves is an iconic graffiti writer and artist from the early ‘80s. He is also the originator of the successful rap group Lordz of Brooklyn. And since they are carrying this Brooklyn Italian heritage with them, it immediately made sense to Sven to come out with this Italian mafia-style type of story. The pitch was simple: Crazy Legs hires a beautiful female model to steal some super secret frames – the »002« – from the Italian mob. The concept of this photo shoot was definitely inspired by New York culture while keeping the visuals slick and chic.

Since we needed strong characters, Kaves thought about asking his friend and famous actor Max Casella to be part of the shoot. He accepted right away, motivated by the love for CAZAL. And second because he was an old-school b-boy back in the days, so the entire adventure was amusing to him. I have to say that we had a lot of fun on the set. These guys were hilarious. I also chose to bring two professional models, as we needed a beautiful face for the female character and this young edgy contemporary type of guy for the posters. 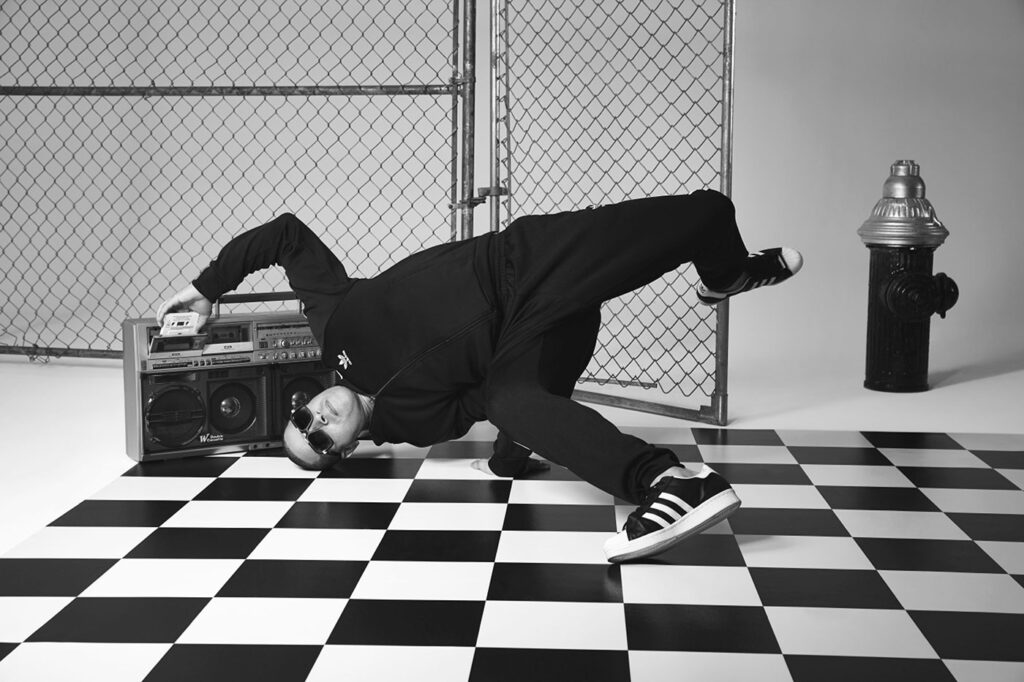 Tell us something about the setting. Why did you shoot in a studio instead of an outside location?

Since I already shot several lookbooks in the streets of New York, I did not want to go back and repeat myself. Instead, I wanted to bring the New York vibe in a studio by bringing a few iconic elements on set.

Could you go into more detail?

I grew up watching many movies from West Side Story, to Once Upon a Time in America, to Flashdance and all the series that were shot in NYC in the 1970s and ‘80s. The main element that came to my mind right away was the fence with the barbed wire on top. You can see them all over the city. The fire hydrant of course and since we couldn’t have Crazy Legs not busting moves, we had to get that classic linoleum floor and I also added my personal Sharp GF-777 boom box.

So the Rolls Royce is yours as well?

Yes of course! [Laughs] Nah, I wish it was mine.

I really like Cartier as well but CAZAL remains my favorite.

To wrap things up, here’s what may be a redundant question: What’s your personal favorite eyewear label?

CAZAL, of course. I’m a huge fan of the 600 series that I’ve been collecting for the past 18 years. My personal collection is somehow really rare since I’ve been concentrating on getting mostly small sizes. Back then, each model came in at least two sizes. I have a pretty small face, so many of my favorite models looked really big on me. I have a special affection for the »642« in a mottled grey color. I really like Cartier as well and recently got a crush on Hilton, a vintage Italian brand that I’ve discovered through my friend Corey Shapiro. But CAZAL remains my favorite.

Thanks for the interview, Armen. 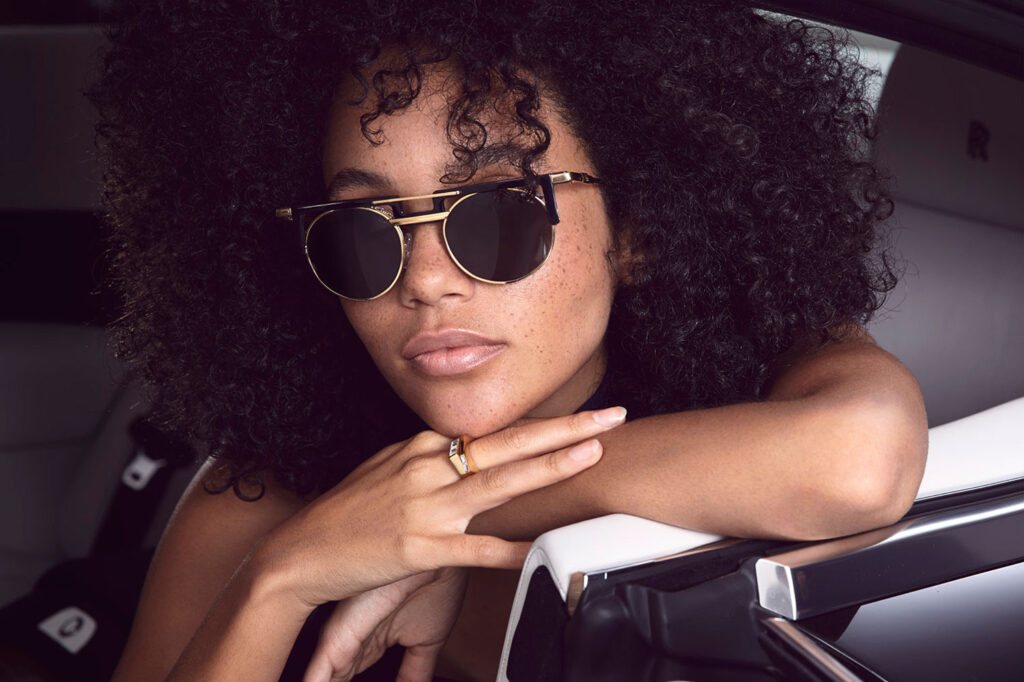