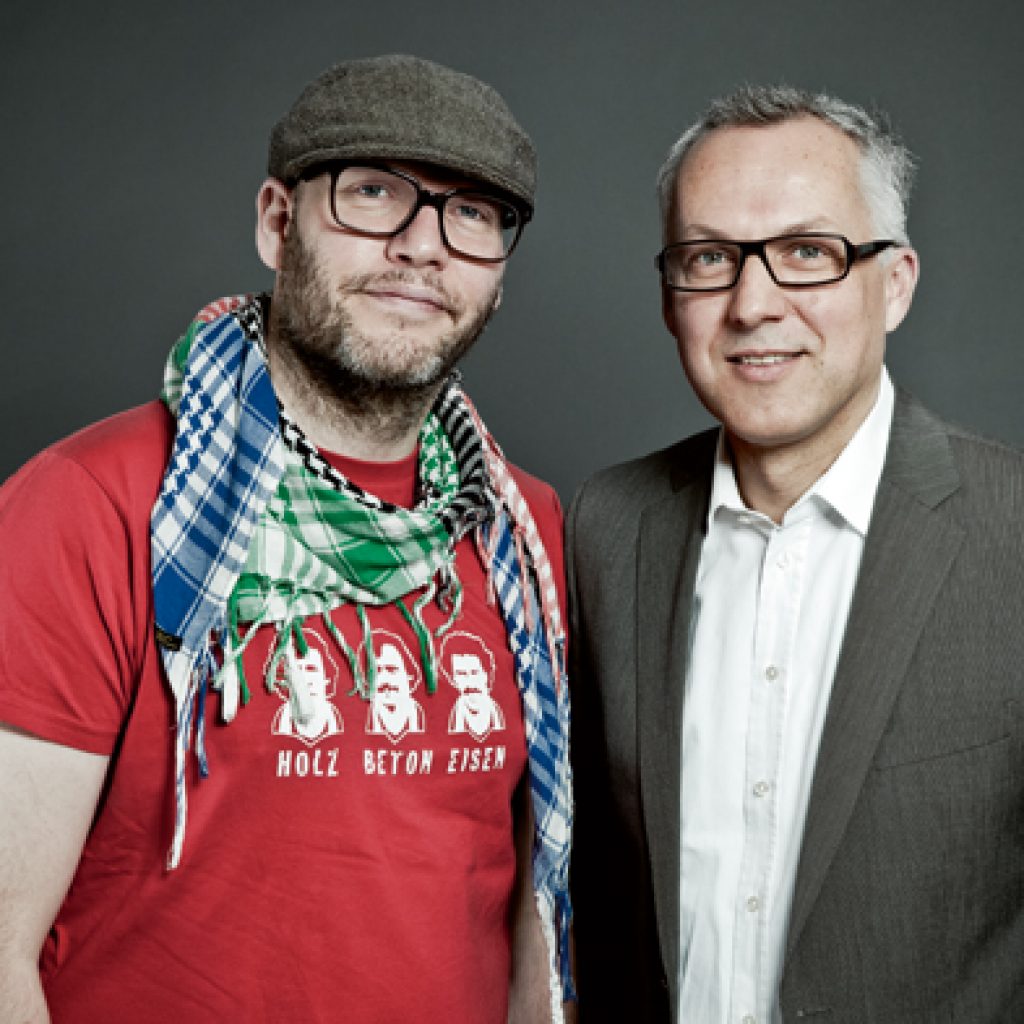 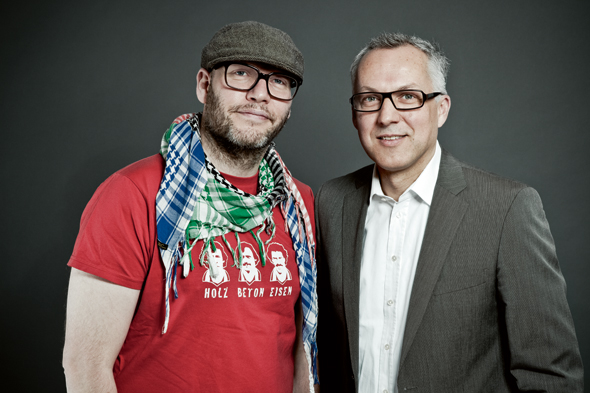 Apparently, the saying, „same, same, but different“ originated in Thailand. It denotes the kind of things that seem exactly alike at first sight, but turn out to be entirely different beneath the surface. It’s often used for brothers, who – although sharing the same gene pool – can differ to a point where you might wonder if they are even related at all. Take the two opticians Gerd and Karsten Kittel from Düsseldorf, Germany, for instance. Although the two share a large number of similarities – including the same profession – their styles and mannerisms could hardly be further apart: One prefers clean designer suits, the other constantly rocks a three-day stubble. One is into leather Budapester shoes, the other into sneakers. And they even live on different sides of the Rhine River – a clear dividing line in these parts of the world. But when it comes to selecting stylish shades and glasses, both Kittels are exactly on the same page, as we found out during their visit to Eyewear Magazine’s offices for their interview.

Hello, Gerd and Karsten. You two are brothers and both opticians. Did the latter happen by chance, or as part of some kind of family heritage?
Gerd: Actually, it’s because of my sister. She nudged me in that direction. I was really set on dental technology at first, and I really wanted to go into a precision craft.
Karsten: When you are young, you hardly know what you want to do with the rest of your life. So it’s only natural to be inspired by your surroundings.

Gerd, what was your motivation to become an optician?
Gerd: I did an internship with an optician in the town of Leverkusen, and ended up really enjoying it.

You two are five years apart in age. Karsten, has Gerd as your older brother been a role model for you when it came to choosing your job?
Karsten: Absolutely, especially since we used to be much more similar than today.

Gerd, you couldn’t stop Karsten from following in your footsteps?
Gerd: No, and why would I? I love my job, and Karsten at the time had already worked with us during his summer break, so he knew what he was getting into.

Your website, www.optik-kittel.de displays both of your stores in the towns of Pempelfort and Heerdt. Does one website equal one company, or do you see yourselves as two separate stores with a shared online presence?
Karsten: Somehow it’s a bit of both. They are two businesses, but in a way we really belong together. We complement and help each other, that’s why we only need one website! A friend of mine had initially created the site just for me. But one day, Gerd linked in his store as well. Back then, I didn’t really see much value in the Internet, I rather saw it as a competitor [to my business]. Today I’m always happy when my designer friend needs new glasses and makes some updates to our website in return.

Do your stores follow different concepts?
Gerd: Since opening my business, I have really matured together with my customers and have gotten more and more into multi-focal glasses. This is why my selection is more in the classical, fashionable direction. My customers have high standards and have really progressed into the designer/quality segment.

Karsten: I’m the more eccentric one and a bit more active in the Düsseldorf scene together with the majority of my friends. I host regular “Funky Frames” parties and take part in soccer tournaments like the “Chuck Norris Cup”. I love wearing sneakers, since they are more comfortable and I love fat glasses. I only try to do things that are fun, which also applies to my business. Due to my location, I have to spend more energy on drawing people in. Nobody will come out to my store for glasses they can get everywhere else.

What is the reason for your different concepts? Do you coordinate your approaches or is either one of you doing his own thing?
Karsten: I’ve previously spent a long time working for other companies and did not find any fulfillment in that. Now I’m able do what I love for a living and the customers can see it. They feel like they are getting a more sincere customer service. You really have to make your own experiences along the way in order to get to this point.

Gerd: Since I had already spent some time working independently as a store manager, starting my own business was only a logical step for me, just a matter of time. Each of us follows his own concept and philosophy. But we also communicate a lot and visit the same tradeshows together.

You both carry some of the same brands. What’s the percentage of brands offered at both Kittel brothers locations?
Gerd: Right now maybe 20 percent, mostly niche brands, for example small frames by Colibri. Earlier on, it used to be more, but even though there are similarities in terms of brands, we hardly ever pick the exact same models for our stores.

What about the clientele? Are typical Gerd Kittel customers different from Karsten Kittel’s?
Karsten: My customers are younger, cooler, nicer, look great and all play in a band.
Gerd: Sure, sure… 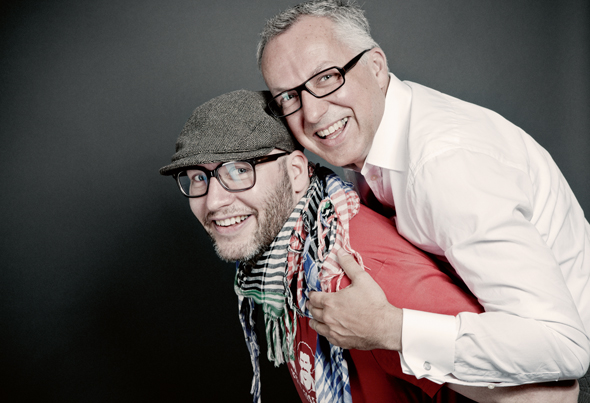 Are there customers from the town of Heerdt, who get their glasses at Kittel in Pempelfort and vice versa?
Gerd: In case customers can’t find what they are looking for at one store, we always recommend the other location. All that matters is that they’re getting a set of “Kittel Glasses”!

What other synergies exist between your businesses, besides your shared website? Are there rebates, joint marketing initiatives or the like?
Karsten: I’m willing to take anything I can get! Gerd is always happy to take care of these kinds of things and does a great job at it!
Gerd: Yes, we have a joint balance sheet with our glass supplier and share some advertising initiatives, as well as listings in phone books etc. But as far as lenses and frames go, we’re not really buying with an eye for rebates, rather based on what we like and what our customers are requesting. In cases where our suppliers offer a rebate scheme, of course we try to leverage that.

Do you coordinate your brand portfolios? How do you go about it? Do you visit tradeshows together and chat about who gets to order which new brand?
Gerd: Yes, that’s exactly how it’s done… including a large dose of humor, of course!

Have suppliers tried to play you two against each other? And how do you deal with it?
Karsten: That tends to happen sometimes, but we make sure it happens only once.
Gerd: Played against each other might be a bit of a stretch, but here and there, some sales rep has gone a bit beyond the call of duty, so it was time for a quick reality check.

Have you considered launching a shared business, some type of joint venture?
Gerd: Not at the moment, but I can imagine a new joint project in the future.
Karsten: Gerd, that’s a great idea!

Since you both operate stores in the same town with some of the same brands in your line-up, you’re ultimately competing with one another. Does that affect your brotherly relationship?
Karsten: No, even if we do carry the same brands, we go for completely different models that we have seen at the last tradeshow.

But there must have been situations where the two of you have “butted heads”? Any stories?
Karsten: Really nothing that can’t be resolved over a beer.

How do you conduct your marketing and customer retention activities?
Gerd: We’re an active part of the annual Düsseldorf carnival festivities and sponsor local soccer clubs. We also take part in the same events hosted by next-door businesses (perfume store, fashion boutique) and we’re known for our legendary “O.K.” birthday parties.

Which styles will set new directions in 2012?
Karsten: Doesn’t matter, as long as it’s not run-of-the-mill.
Gerd: The larger models will continue to dominate, with increasingly softer features and lighter colors, with more colorful variations here and there. Plastics will also continue to lead.

How do you see the future of the industry?
Karsten: Rosy!
Gerd: I’ve never regretted going into business for myself and that will never change.

No matter how tough it gets, what will Gerd Kittel never be caught doing?
Gerd: Selling contact lenses over the Internet!

And Karsten Kittel?
Karsten: I would never join Bayern Munich!

Karsten, what could be changed about Gerd?
Karsten: As long as he doesn’t color his hair, he’s fine.

Thanks for the interview.
We have to thank you! 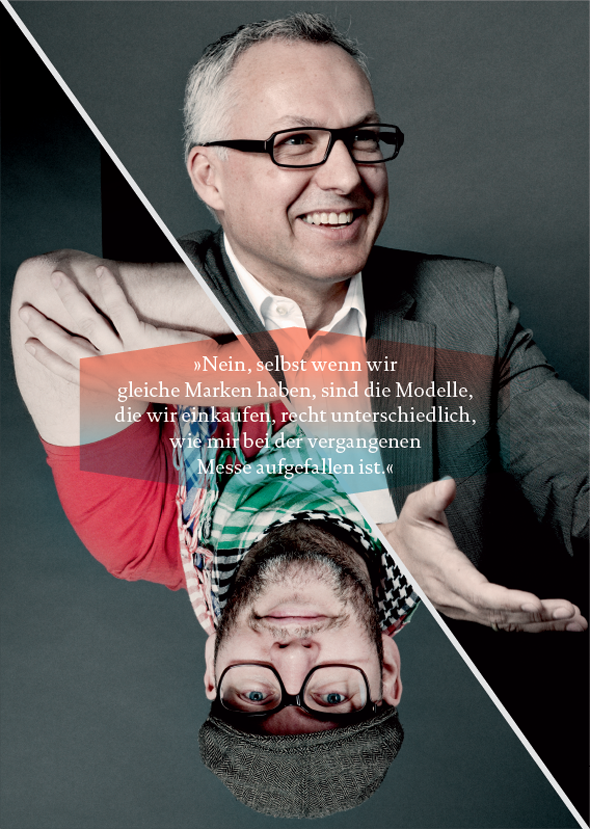 ETNIA BARCELONA // A MATCH BETWEEN ART AND SPORT