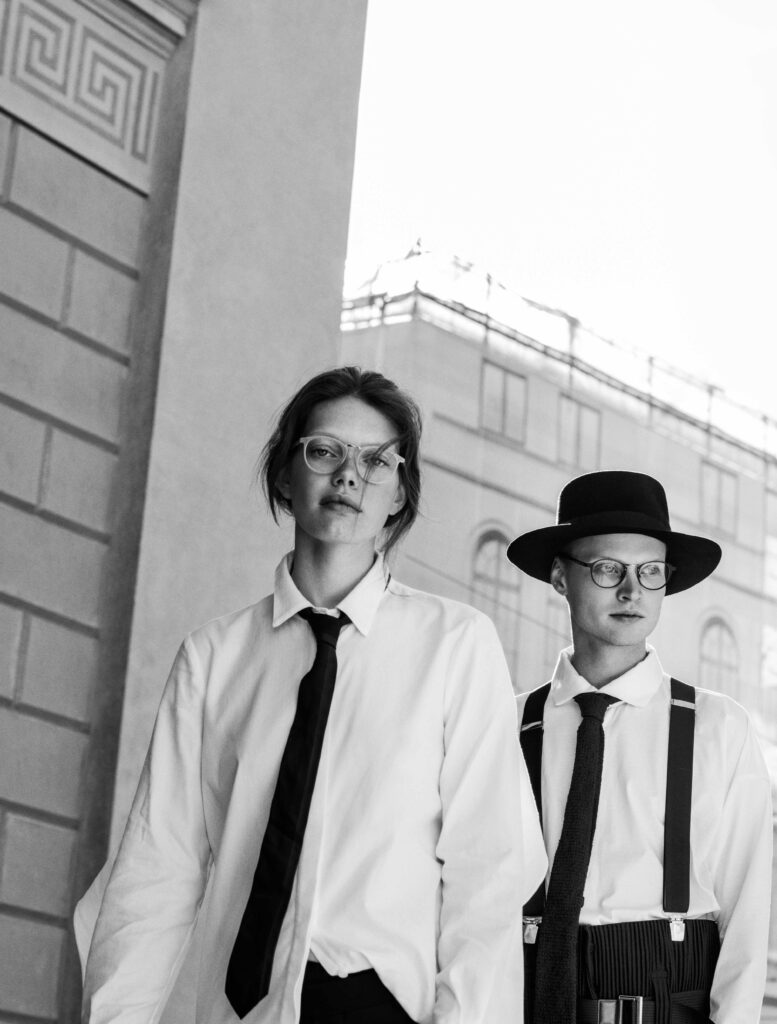 [/vc_column][/vc_row][vc_row][vc_column width=”1/2″][vc_custom_heading text=”As a young and upcoming photographer, Elizaveta Porodina has already developed a highly recognizable visual style. The native of Moscow who has made Munich her base of operations likes to engage in a close dialogue with her subjects, creating an intimate atmosphere in her shoots. This caught the eye of German eyewear label METROPOLITAN, who tapped Elizaveta for their latest campaign. We caught up with her in Munich to learn about her close involvement in the campaign’s genesis and her overall style.” font_container=”tag:h6|text_align:right” google_fonts=”font_family:Noto%20Sans%3Aregular%2Citalic%2C700%2C700italic|font_style:700%20bold%20regular%3A700%3Anormal” link=”url:http%3A%2F%2Fwww.owp.de%2Fen%2Fmetropolitan-eyewear–optische-werke-passau.html||target:%20_blank”][/vc_column][vc_column width=”1/2″][mk_gallery images=”33256″ column=”1″ image_size=”full” collection_title=”Elizaveta Porodina”][/vc_column][/vc_row][vc_row][vc_column][vc_column_text]

Elizaveta, your name sounds like you hail from the Eastern part of the hemisphere?
That’s right. I was born in Moscow and lived there until my 13th birthday.

What exactly brought you to Munich?
My mother’s new job at [German optical company] Rodenstock and better professional prospects for myself.

Was it easy as a Russian youth to find your footing in Germany?
On one hand it was easier than I expected because I have a talent for languages and had quite an easy time learning German. I was also soon getting the hang of all the subjects at school. The teachers appreciated my engagement and ability to take the initiative. At the same time, I wasn’t communicating well with my peers. We weren’t on the same page and our interests and priorities were completely different. So I ended up spending most of the time during my early years in Germany by myself. That was also the time when I began to draw, paint, and write – to better capture and reflect on my experience.

Was this early creative blossoming also the start of your photography career?
After spending years getting deeper into illustrating and painting, I discovered photography as another visual medium through a friend of mine. I still don’t feel a strong difference between drawing and photography in many cases, especially my rather concept-based works. It’s all about the “right” composition, the fitting expression and several very subtle layers of meaning, and less about the medium of choice.

But despite these creative tendencies, you ended up getting a degree in a different field, right?
Yes, I earned my degree in psychology with a focus on clinical psychology and depth psychology. During the early days of my photography career I also worked in a few psychotherapeutic and psychiatric institutions as a therapist in training. Overall, studying this field and applying myself on multiple layers in this profession, which I also consider as a trade and an art form, has really benefited me in many ways. During my studies I was able to learn a lot about communications, the processes behind human behavior and human experiences and people in general. I see it as an essential foundation for my work as a photographer.

[/vc_column_text][mk_gallery images=”33251,33255,33252,33253″ column=”4″ image_size=”full”][vc_column_text]That kind of depth really resonates in your images. What inspires you the most about photography? And what tends to be the most unpleasant aspect about it?
I’m inspired by the challenge to engage in photographic and social situations and tough constellations – difficult weather conditions, complicated locations and constellation of muses –  in which I have never been before. And then mastering them. That is the most fascinating and, at times, unpleasant part of my process.

How would you describe the philosophy behind your photography?
50 percent planning, 50 percept experimentation, 100 percent authenticity.

Despite your young age, you have already developed a strong visual language. Did that happen by chance, or is it an intentional process?
It’s definitely not a matter of chance, but also not fully calculated intentionally. I think that when you are honest to yourself and your work, always remain pure in your messages and continue to take on more and more projects that suit your tastes, the more your “own” voice will crystallize. And it gets more clear and pronounced with growing experience. In my case, this voice – and my visual language – is determined by exploring the emotions and the depth of human (emotional) experience. I also don’t force any scenarios on my muses, which they may not be able to identify with. I much rather focus on authentic emotions and exposing the facets behind the personalities of my muses, which are true and authentic. It’s all about bringing them to the surface and emphasizing and enhancing them, sometimes even grotesquely or multiplied.

But speaking of your muses, that also requires a certain type of model, right?
Yes, I prefer to work with people who are interested in more than just modeling. I call them “muses” because they are fully invested in their work. They inspire me and are ready to push through their own boundaries for the sake of art. Their physiognomy, their manner of movement, and their inner expressiveness – all that often speaks in that idiosyncratic, inimitable language that always reminds me of how contradictory and unique human nature can be.

For reasons of costs and flexibility, mostly digital. Although we also own a few analog cameras and continue to experiment with them on some projects over the years.

The Nikon D800 / D810 has been my constant companion for years now. I am most comfortable with this camera’s focus, look, and handling. It feels the most like there’s nothing between myself and my subjects.

Let’s talk about eyewear, and the challenges of capturing it in images. How do you approach this product-related field?
My ambition is not only to shoot engaging images of eyewear, but also to capture authentic shots of magic moments. In my opinion, a successful campaign is always about capturing a fantasy, a dream image. But you must not neglect the technical and formal aspects, because a well-executed campaign also has to be able to present a product in the best possible light. That means for instance the lenses, material properties, and the proportions of a frame on the wearer’s face. Aligning these two ambitions is the great challenge behind eyewear photography for me.

You also recently shot the current METROPOLITAN campaign, which strongly bears your signature style. Were you also involved in creating the concept?
METROPOLITAN approached me with the guideline to shoot the campaign in an open, urban atmosphere. They also encouraged me to become strongly involved in all other aspects such as casting, special locations, the styling concept, as well as the appearance and constellation of the models.

How would you describe the concept in detail?
We were aiming for images that express a certain sense of timelessness and lightness, but also exhibit a certain spatial and symbolic depth. That’s why I opted for a rather documentarian photographic mood, marked by soft backlighting, dynamic movements, and analog-style black and white. It was my special goal not to have the protagonists pose for pictures, but move about freely, dancing and laughing. I followed them around with my camera and hit the shutter whenever moments of special magic unfolded between us.

You mentioned your involvement in the casting process. How did that go?
Casting is an aspect that is really close to my heart. I’m always hesitant to keep casting new and different models and would much rather work with friends and muses, with whom I’ve established relationships over several months or years. This special approach to casting carries over into my work – also including the METROPOLITAN campaign, where I worked with some of my friends. Alexander Wolf has been a strong inspiration for some of my best projects over the years, and Nika Rusakova has now been part of five projects in different countries.

In how far did you adjust the mood and styling behind the images to suit the eyewear?
That question seems to imply that I’ve made some strategic decisions in advance, but that’s not really how I would define my work. I work rather intuitively. In many cases, I end up making decisions right while I’m shooting, following my gut on choosing locations, poses or certain modes of expression. After the initial planning I tend to strongly trust and rely on my instincts.

We can really see it in your photos. Thank you kindly, Elizaveta.[/vc_column_text][/vc_column][/vc_row]